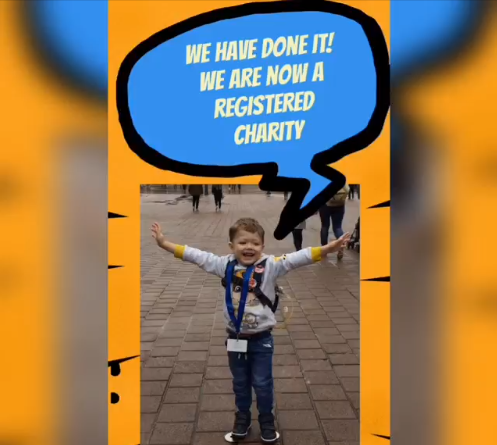 This is our first year as a charity and what a year it has been!
We received registered charity status on 11th March 2020 and the support we have received has been phenomenal, even with everything else going on in the World.
Our fundraising was kicked off in March by one of William’s school friends, Amelia, who did a 2 mile sponsored horse ride

and the 40th Warrington Rainbows raised money for us with the smarties challenge.
In April we launched the faster pasta challenge, which so many of you took part in during lockdown

May saw the Smith family complete a ‘lockdown’ triathlon challenge

and another of William’s school friends, Marley, completed a marathon of running, walking and cycling

We received donations from Bridgewater Highschool, following their 2.6 challenge and Emma Dooley from her football cards. We also gave out our first ‘little box of smiles’

In June we gave out 180 of our ‘little bags of help’ (which are emergency supplies for parents on unexpected admissions to hospital) to Alderhey and Manchester children’s hospitals, the Children’s ward at Warrington and the Ronald McDonald Houses at Alderhey and Manchester.
Our Amazon wishlist was set up and we have received thousands of gifts from this for our boxes of smiles!

Our pin badges were designed and manufactured and we have sold nearly 900! Its lovely to see people wearing them

John Cannon set a challenge to grow his beard until he reached his target amount of donations, he then dyed it pink!
We received a huge donation from The Hut Group and Manchester City Council of Espa products for our bags of help and boxes.
Dean Cunningham donated money raised from a football card

We then commenced the preparations for William’s Birthday Gift. We received so many donations through our wishlist, which allowed us to collate activity packs

for the wards, for children to take home with them. We were also able to purchase Kindle tablets, portable DVD players and DVDs for the wards

which were given out in October.
October also saw Callands and Locking Stumps Primary schools holding super hero days

Nov/ Dec the Christmas Smile toy appeal was launched by James from Valli Opticians and we received an amazing amount of donations from the people of Birchwood and beyond!

This was added to by a fabulous donation from Sana Fitness Warrington who also donated over 100 toys!

while raising a fantastic amount for the charity!
The guys from Madison’s Workington held a 6 hour mad Friday DJ party in aid of William’s Gift

People were making things and donating the money. Charley made face masks

Sarah made xmas wreaths and Jane made xmas decorations

We have had donations throughout the year from our collection boxes at the One Stop in Callands and book clubs from work as well as cash and Just Giving donations and numerous donations of items for our boxes. We have also had support from monthly direct debits that people have set up and Birthday fundraisers!
WOW what a year! How can we ever thank you all! With all your support we have been able to help bring smiles to so many children and their families in hospital

We have put a picture video together which includes some of the events.
From all of us at William’s Gift we wish you a happy and healthy New Year!